Introduction to inscriptions on bronze arrowheads

A unique phenomenon that is well defined in time and place is the engraving of names and titles of private individuals on bronze arrowheads. In most cases, the text is written in fixed patterns, the words ḥṣ and /or bn, followed by the name or title of the arrow owner.
The delimitation in time is defined and expressed by the short period in which this custom was in use, from the 11th to the 12th centuries BCE.
Most of the arrows were found in robbers’ excavations and made their way to the antiquities market. Two locations from which the arrows were found are known, the village of Al Khader (west of Bethlehem) and the area of Bekaa Valley in Lebanon.

An arrowhead with engraved letters was purchased in 1958 by Father Józef Tadeusz Milik from a collector who bought it from a farmer in the The Beqaa Valley in Lebanon. The arrowhead had letters in an ancient Phoenician writing; on one side of the arrowhead was the phrase ḥṣ zkrb[…] חצ זכרב..., this inscription was completed by the scholars as ḥṣ zkrbʾl חצ זכרבעל . 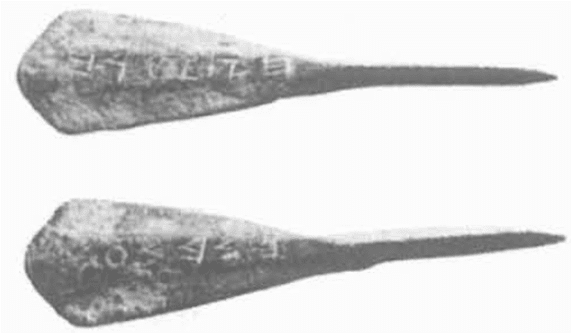 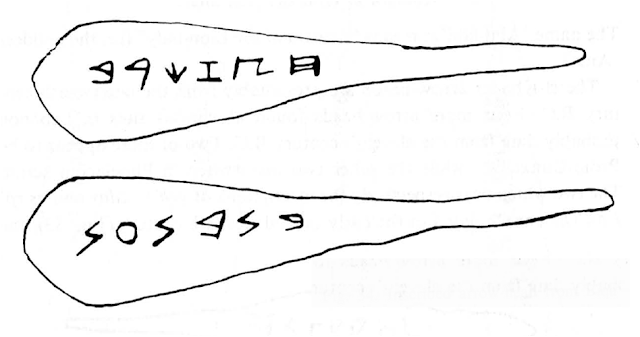 Zakarbaal - The name is known from the Story of Wenamun (ancient Egyptian papyrus) and dated roughly to 1070 BCE. The Egyptian priest Wenamun sailed on a voyage to Canaan. His goal was to bring logs of cedar trees back to Egypt in order to build a temple to the god Amun. During the journey Wenamun records his adventures in the cities and places along the Canaanite coast. He writes about the city of Dor and its inhabitants, one tribe of the see people is known by the name Tjeker (the tribe is mentioned in the reliefs and inscriptions of Ramses III). Wenamun continues his journey going north through Sidon and Byblos (gbl), the Phoenician cities of the Lebanese coast. Another name mentioned by Wenamun is Zakarbaal the king of Byblos.

On the other side of the arrow is written bn. bn. ʾn[t], which is interpreted as “the son of the son of Anat ”.

As noted above, the arrowhead came from the antiquity market, probably from an antiquity robber. Therefore it is impossible to tell which site or grave it was robbed from.

Other arrows with the theophoric ending Baal

Appendix 1 : rkb ʾrpt as the title of the Canaanite god Baal

Baal: the god of the clouds, storms, lightning and thunder, baal is the god who waters the land, he is the powerful warrior god, brother of the yam, Anat and Ashtoret, among his many names is also the enigmatic title rkb ʾrpt - רוכב ערפות 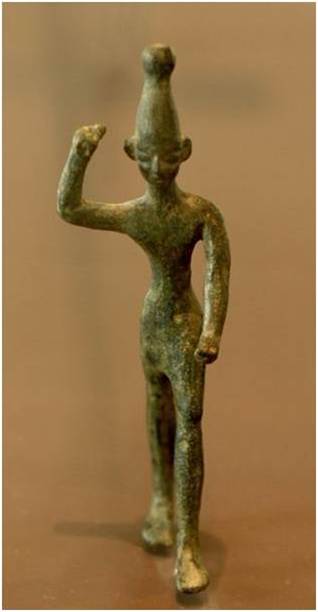 The root ʾrpt appears in the Bible, Deuteronomy 32:2 my doctrine shall drop as the cloud of rain, my speech shall distil as the dew; as the small rain upon the tender grass, and as the showers upon the herb

Deuteronomy 33:28 And Israel dwelleth in safety, the fountain of Jacob alone, in a land of grain and wine; yea, his heaven is a cloud of dew.

Due to written above it is clear that ʾrpt = rain cloud

References to baal in the Bible

Baal was a familiar and hated idol by the authors / editors of the Bible; see Judges 6:32 Therefore on that day he was called Jerubbaal, saying: 'Let Baal contend against him, because he hath broken down his altar.

Gideon's name is Jerubaal ירובעל, the biblical author explains the Hebrew interpretation of this name as "he will fight with Baal". However, in Hebrew/Semitic the root yra ירה means to found, to establish, see Genesis 31:51 And Laban said to Jacob: 'Behold this heap, and behold the pillar, which I have established between me and thee.

Therefore, The name Jerubaal ירובעל actually glorifying the baal, and it means to found / establish the god Baal.

According to the Bible, the ritual of Baal was congregating with weapons and bloodshed, as well as human sacrifices,

I Kings 18:26 And they took the bullock which was given them, and they dressed it, and called on the name of Baal from morning even until noon,…… 28 And they cried aloud, and cut themselves after their manner with swords and lances, till the blood gushed out upon them

rkb[.] ʾrpt - rider on rain cloud : as the title of the Israelite God

In a closer look at the Bible, we find the God of Israel depicted as the rider of clouds. The Hebrew equivalent to the Canaanite word ʾrpt ערפת is the word ʾrbt ערבת (the exchange of the letters "ב" and "פ" is common in the Semitic languages).


Isaiah 19:1 The burden of Egypt. Behold, the LORD ride upon a swift cloud, and cometh unto Egypt; and the idols of Egypt shall be moved at His presence, and the heart of Egypt shall melt within it.

Psalms 68:5 Sing unto God, sing praises to His name; extol Him, the rider upon the clouds, whose name is the LORD; and exult ye before Him.

Sass, B. Arrowheads with Phoenician Inscriptions: If Not Instruments of Belomancy, What? in:. Durand, J.-M and A. Jacquet, A. (Hg.), Magie et divination dans les cultures de l’Orient, Pal 2010, 61-72. (Arrowheads)

Sass, B. and Finkelstein, I. (2016) ‘The swan-song of proto-Canaanite in the ninth century BCE in

light of an alphabetic inscription from Megiddo’, Semitica et Classica 9.

The site is located between the city Netivot and kibbutz Bari. The name of the site in Arabic is Qubur al- Walaydah, meaning “the cemetery of the tribe of Walaydah”.

Waladyah is a Bedouin tribe that once inhabited the area. In the excavations it was discovered that the upper layer of the site was a Philistine agricultural village from the late Bronze Age.

The site was shortly excavated in 1977, apart from brief reports there are no publications of this excavation. From 2007 to 2010 excavations began by Ben-Gurion University. The researchers were interested mainly in the exchange of cultures and the differences between agricultural and nomadic communities in the Late Bronze and Iron Age periods. Most of the floors and walls of the village had been exposed at ground level and destroyed by plowing and robbing of stones. The excavators found a number of grain silos that were reused as garbage dumps containing pottery vessels and other objects. 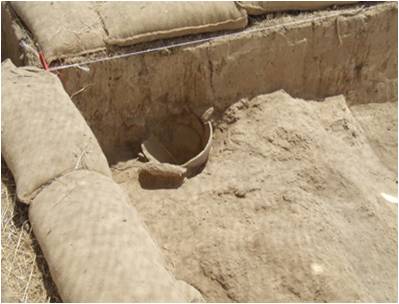 In the compound there where remains of a wine-press, loom and oven for baking bread. Among the pottery vessels are numerous shards of double-colored Philistine ceramics (black and red). The cooking pots found in the compound were of the Philistine type, so it is clear that the material culture was Philistine. The agricultural character of the village is emphasized by large quantities of flint blades from the Iron Age used to make scythes. Burnt organic material suitable for carbon 14 analyses was found in the site. The main building characteristic is of the 'Egyptian governor's houses' type, this dates the structure from the end of the 13th century BCE to the beginning of the 12th century BCE. Egyptian buildings of this type were found in the nearby sites of Tel - Gama and Tel - Sharuhen. 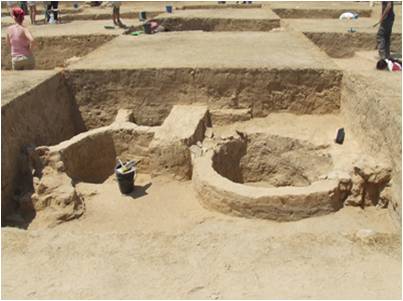 The Inscription
At the earlier excavations the diggers found an inscription on a basin of a storage vessel. The letters are proto - Canaanite in shape and are similar to the letters from the Late Bronze Age or the beginning of the Iron Age. This dating corresponds to the culture of all the materials that were found in the site. 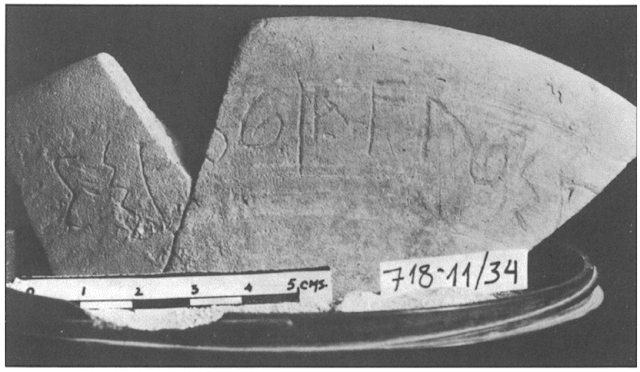 The inscription is unclear, and the interpretation is difficult and uncertain. Below is my suggestion for dividing the letters into words, and the meaning of the inscription:

Symbol number 4: Due to the missing piece of pottery the sign is not complete; therefore there can be 3 letter- options: ayin ע ,bet ב or lamed ל

Symbol number 5: This symbol can have 2 options: bet ב or lamed ל (see Table 4). The decision which letter is which symbol will have to rely on the logical meaning of the first word.

I. First part: šm - שמ , the name of… , possibly a prefix of the divinity or a place in a private name of a person.

1) gʿl - געל  : a private name, perhaps a name of local Canaanite deity, see Judges 9:26 And Gaal the son of Ebed came with his brethren, and went on to Shechem; and the men of Shechem put their trust in him.

2) gbl - גבל : the ancient name of the city Byblos on the Lebanese coast.

A similar formation of this name is an arrow head from the Early Iron Age that bears the name šmbʿl - שמבעל.

Symbol number 6: a vertical line that separates the words; this is common in later ancient inscriptions see Byblian royal inscriptions.


there are two signs (that i know of) that have high similarity to symbol #8 in the Qubur al-Walaydah inscription.

Dedication Sphinx to Ba‘alat / Hathor with Proto-Sinaitic alphabet from the Hathor temple at Serabit el-Khadim, Sinai. 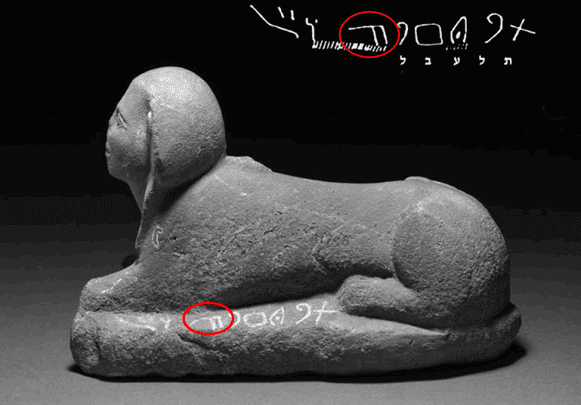 Options for the second word
I. Option 1: ahal - אהאל : the root of the word may be א.ה.ל, if so, the meaning of the word refers to the act of establishing a group of tents of a man or a tribe in a specific place, see Genesis 13:12 Abram dwelt in the land of Canaan, and Lot dwelt in the cities of the plain, and erected his tent as far as Sodom.

I. Option 2: The word might read as aial - איאל = eiel , and is probably a first name of a person.

The prefix of the name is אי - ai = ei , in the Bible we find several names that starts the same way, see queen Jezabel = izbel - איזבל and the name ichabod - איכבוד .

The name aial = eiel - איאל , contains the theophoric suffix "el -אל" this is the name of the father of all gods in the Canaanite mythology, as well as the name and the only god in the Jewish religion. Using the suffix "el -אל" in private names, is a common practice among Hebrew names, see names as Ezekiel - יחזקאל, Daniel - דניאל.

The third word
the letters can be - m[b] - [מ[ב or m[d] [מ[ד: Perhaps the beginning of a place name, maybe the place that the personal names of the people in the previous words came from. Or it can be a beginning of another personal name

My suggestion for the inscription formulation is: 2 personal names, from….

Del Olmo Lete, Gregorio, and Sanmartin, Joaquin A Dictionary of the Ugaritic Language in the Alphabetic Tradition. Handbook of Oriental Studies, Section I, the Near and Middle East, 67. Leiden: Brill, 2003. Third Revised Edition

Goldwasser, O. 2016 - "The Birth of the Alphabet from Egyptian Hieroglyphs in the Sinai Desert," in Dafnah Ben-Tor (ed.) Pharaoh in Canaan: the untold story. Exhibition catalogue. Jerusalem: Israel Museum.